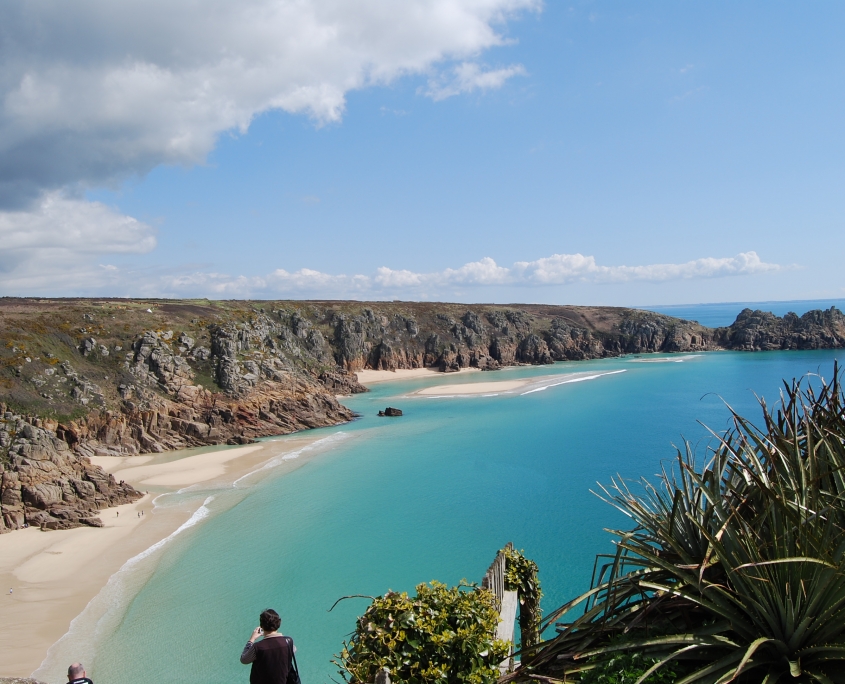 Beaches and Coves in West Cornwall

St Loy’s Cove
Is a very peaceful rocky cove just below our farm and can be reached from the farm lane through a wooded valley and down to the cove. This walk is one of my favourites a very special time for me is when the bluebells carpet the floor and the sun is shining through the new green leaves on the trees.

Sennen Cove
Well known for its surfing for all abilities there is a surf school located on the beach for those who are more adventurous. A wide open beach with beautiful golden sand slowly flattening out to the sea, great to take walk when the tide is out, just beyond is the smaller but less busy Gwenver beach, accessed via the coastal footpath from Sennen Cove.

Nanjizal Bay
Nanjizal bay also known as Mill Bay is a small beach and cove reached via the South West Coast Footpath from Lands End in the North and Pothgwarra to the South you may even see a Cornish Chough or two on your travels. A very peaceful unspoilt location to stop and enjoy the scenery have a swim or just relax and sunbathe.

Marazion
The beach at Marazion is a stunning sandy forshore that forms the Eastern side of Mounts Bay and is therefore both sheltered and safe. and enjoys wonderful views across to St Michael’s Mount! At low tide you can walk across the causeway to the mount; when the tide is in, a small boat takes passengers to and fro high tide. Several water sports are available on this beach, including windsurfing, kitesurfing, jet skiing and sailing. There is a large car park beside the beach as well as some roadside parking. The beach has toilets, shops and cafes.

Cape Cornwall
Cape Cornwall is one of only two capes in Britain and marks the spot were the Atlantic currents divide. The chimney stacks dates back to 1894 when Cape Cornwall mine was in operation extracting tin and copper from out under the sea. A fantastic place to take a walk along the coast path or sit and watch the sun setting into the sea on a warm summers evening. St,Just town is just a mile away with some lovely art galleries great shops and pubs.

Mousehole
Mousehole is a picturesque fishing village on the south coast between Newlyn and Lamorna, with its cobbled streets full of bistro’s and art galleries.
It is re nouned for it’s fantastic display of festive lights over the Christmas and New Year period throughout the village. This little place is a real gem and worth a visit.

Lamorna Cove
Situated a few miles south of Newlyn the valley and cove of Lamorna first attracted the attention of artists in the 19th century including Alfred Munning and Lamorna Birch who named himself after the beauty spot, some of his paintings can be found at the Penlee House Gallery in Penzance. Lamorna is it said is at the heart of what purists insist is the real Cornwall. A timeless countryside bound at it’s edges by rocky coves desolate beaches and massive rock formations.

Your widget will appear here.

Due to a late cancellation we have a last minute short break for this weekend (23rd-25th July inclusive) in our lovely shepherds hut, with its own private hot tub and 5ft double bed, what’s not to love!
Please ring Julia on -01736810705 or julia@boskenna.co.uk ... See MoreSee Less

Job role: Assisting the owner in a local accommodation business, 3/4 mornings a week (09:30-12:30).
Very goods rates of pay for the right applicants.

With the world in turmoil, here's a quick video to escape from it all...Watch some of our little calves out at grass with their mums, enjoying the sun on their backs (totally oblivious to whats going on in the world)!

We understand there is to unessential travel allowed at the moment, however, we look froward to seeing you all once things return to normal. Stay safe and keep well, Julia. ... See MoreSee Less

Time with you right now would be amazing. Must book when this is all over

From our honeymoon july last year, they loved to stare at us 🤣🙈

This site uses cookies. By continuing to browse the site, you are agreeing to our use of cookies.

We may request cookies to be set on your device. We use cookies to let us know when you visit our websites, how you interact with us, to enrich your user experience, and to customize your relationship with our website.

Click on the different category headings to find out more. You can also change some of your preferences. Note that blocking some types of cookies may impact your experience on our websites and the services we are able to offer.

These cookies are strictly necessary to provide you with services available through our website and to use some of its features.

Because these cookies are strictly necessary to deliver the website, refusing them will have impact how our site functions. You always can block or delete cookies by changing your browser settings and force blocking all cookies on this website. But this will always prompt you to accept/refuse cookies when revisiting our site.

We fully respect if you want to refuse cookies but to avoid asking you again and again kindly allow us to store a cookie for that. You are free to opt out any time or opt in for other cookies to get a better experience. If you refuse cookies we will remove all set cookies in our domain.

We provide you with a list of stored cookies on your computer in our domain so you can check what we stored. Due to security reasons we are not able to show or modify cookies from other domains. You can check these in your browser security settings.

We also use different external services like Google Webfonts, Google Maps, and external Video providers. Since these providers may collect personal data like your IP address we allow you to block them here. Please be aware that this might heavily reduce the functionality and appearance of our site. Changes will take effect once you reload the page.